Our instructors are exceptionally knowledgeable in their fields and have the passion to teach others. They are former crane operators, crane inspectors, rigging inspectors, business owners and OSHA instructors at the OSHA OTI level. Each instructor has the approach and demeanor necessary to involve the students in this training process. 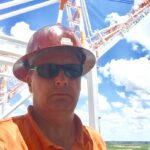 Scott Weldon has been a Certified Level I and II Rigger and Signal Person Trainer for the past 6 years and a Certified Crane Operator and Crane Inspector for over a decade.

Scott’s fascination with cranes began at the very early age of 10 when operated his first crane on his grandfather’s farm. At about 12, he moved to Wisconsin with his family where his father started a construction company. When his father needed an extra hand and he wasn’t in school (and even sometimes when he was supposed to be) and mostly when a crane was going to be on-site to set trusses or component walls, Scott would be there to help.

Later, when he purchased the construction company from his father, he also purchased several cranes and started his own rental house.

Scott has held contractor’s licenses in Wisconsin, Michigan, Tennessee and Florida, but he has never felt more comfortable than when he is working with cranes in some respect. After he sold his construction and crane businesses in the early 2000’s, he decided he would take a break. Well that didn’t last long. He went to work for a company where he began teaching rigging safety. He felt a satisfaction that he had not felt before. So, he decided to take it a step further and do this full time. In addition to teaching the fundamentals, Scott can share his immense experience and initiate discussions based on his personal experiences in the field. He is able to answer questions that arise from those discussions. This is something that cannot be shown in a manual but is of the greatest value to his students.